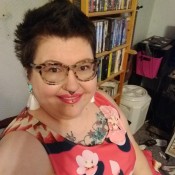 Last night I went to a party. It was a housewarming + birthday party, followed by a play party. I was a little nervous leading up to things, but I sucked it up like a big girl and went. I had invited a friend to be my +1,but he ended up having to work and wasn’t sure he was brave enough for that kind of party… Lol.

Anyway, the first half went great – I was a little drunk and was talking mostly to a couple I had just met. Attractive, nice, friendly people.

The second half of the party, I ended up playing with the couple. Afterwards I commented that his wife was the first woman I had kissed in like 15 years. He realized then he never asked me if I was even into women – not too big of a deal though because I feel like bodies are just vessels we’re poured into and secondary to other traits of attraction. I’m pretty flexible, though I primarily like men.

I also shared a few wonderful kisses with the hostess, something I wanted to do when I first met her months ago.

I ended up heading home around 4am, got home around 5am, and the pups were super excited to see me. I had a hard time getting them off of my bed so I could get some sleep… Lol.

So all in all, a good night! I’m slightly hung over (just a headache) but I’ll live. And I got invited to another party next weekend.