A few days ago, Facebook (and actual real live persons) were all in an uproar over this article. To paraphrase, the Los Angeles chapter of The Satanic Temple was coming to our town to preform a ritual… which they said would help protect us from our crooked, horrible mayor. If you’re unfamiliar with this group, they are basically anti-dogma and for human rights and living a compassionate and respectful life with others. But Lancaster is filled with crazy religious zealots, so I figured this was going to go badly.

The meeting at City Hall was to take place at 3pm, but I got there at 2:10. At that point, it was just me, and these two guys. At this point there was one Park Ranger there to keep an eye on things. No police presence yet.

Check that sign out. If you never sin, you never die! 😉 I was expecting to see a lot more people against this then those two, so I got comfy on a bench in the shade.

A few more people showing up but its still pretty quiet. Also early. At this point I can hear the guys with the sign bickering with other people about how they aren’t real Christians. These guys have a bad attitude. Two Park Rangers now.

A lot more people have arrived and things are getting loud. There are two main groups of people, one chanting and yelling in “tongues” and the other group on their bullhorn screaming at them that that’s not a real language. Let the infighting begin… *sigh*

The TST group arrives, and while their banner carriers stayed outside, the main group went inside of City Hall. At this point all hell broke loose.

This is a super short video clip of what happened. It just goes downhill from here.

Within about five minutes, the crown forced the TST group to leave City Hall, and down Kettering to where they had parked. 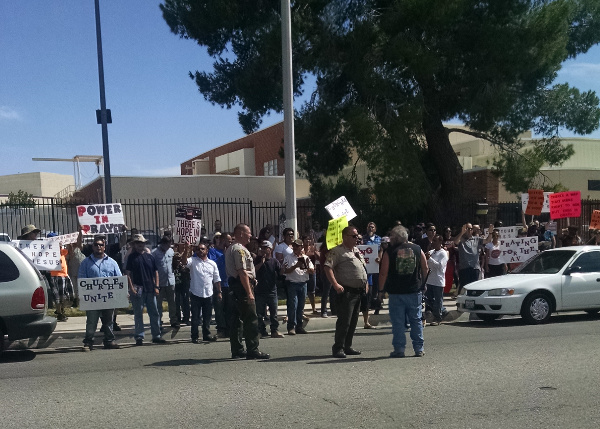 The small group I found myself with (there were about 15 people there in support of the TST) waiting a few minutes at City Hall, then headed across the street. Someone slammed an anti-abortion sign into my head, and someone else screamed at me that they would cast the devil out. I told him to educate himself and kept walking.

Apparently some people who were in support of them used their bodies to protect them and got smacked around pretty hard. At this point there were somewhere between 25 and 30 Sherrif’s deputies taking control of the scene.

As I was leaving, I heard one of the pastors (!!!!) screaming out that these “devil worshippers were welcome to come to my house and meet my Smith & Wesson!”. Another woman was kicking people who were supporting TST.

I met some wonderful kind people, but I saw a lot of hatred and horrible treatment of people from uneducated individuals. This is not a place I want to live in for the rest of my life. 🙁 This makes me sad.

This is what I posted to Facebook. I think it sums up my feelings perfectly.

I’m making this post public because it needs to be seen. Today, a large number of people proved to me that they are a disgrace. The Satanic Temple of Los Angeles came here today to symbolically protect our city from corruption. They came here in a peaceful and friendly, and most importantly non-combative way. How the majority of the people who “greeted” them at City Hall was with screaming, yelling, and violence.

Many of you who saw that the TST was coming here were outraged that they were coming here and that this was an affront to your religious beliefs. You are wrong! The Satanic Temple has the following seven tenants.

One should strive to act with compassion and empathy towards all creatures in accordance with reason.

The struggle for justice is an ongoing and necessary pursuit that should prevail over laws and institutions.

One’s body is inviolable, subject to one’s own will alone.

Beliefs should conform to our best scientific understanding of the world. We should take care never to distort scientific facts to fit our beliefs.

People are fallible. If we make a mistake, we should do our best to rectify it and resolve any harm that may have been caused.

Every tenet is a guiding principle designed to inspire nobility in action and thought. The spirit of compassion, wisdom, and justice should always prevail over the written or spoken word.

Materially, we believe in nothing that is not demonstrably true, and hold to even those beliefs with an understanding that they, too, must remain open to revision in the light of new scientific understandings.”

To paraphrase, they believe our minds and bodies are our own to govern and that we should do what we can to diminish suffering and cruelty in this world. They do not believe in higher powers and supernatural beings or superstition. They believe in acting of your own free will. How does this threaten your personal beliefs? Are you that insecure?

These people came to us peacefully, and this is how we responded to them. With hatred, fear, and violence. I am disappointed in a large portion of Lancaster, but I am so glad for the kind wonderful women who stood with me and the TST today.